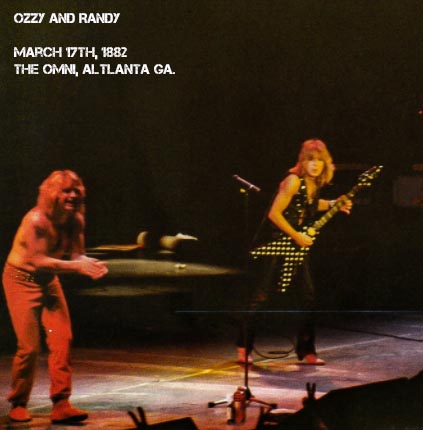 March 17th is always a bitter sweet day on the KnuckleBonz calendar. It’s the day we saw the great Randy Rhoads at the height of his guitar hero powers on the Diary of a Madman Tour in Atlanta. The Omni was SOLD OUT and the 2nd Ozzy Osbourne solo record was charting hard. The band was now a firm Arena headliner.

Can remember watching Randy Rhoads that night in front of the towering Diary of a Madman stage set and being struck by the fierceness of his playing. However,  is was in contrast to his posture on stage. What we were hearing did not seem to match what Randy was doing with his hands. It seemed so effortless for him. It was unlike anything we had every seen. All in our crew at the show were music Superfans, but none was a guitar player. We simply did  not have the ability to understand what we just saw. I told Delores Rhoads about this when we met about the 1st KnuckleBonz statue in 2003 for Randy and she knew exactly what I was talking about. She said, “Yes, Randy was always in good position, his left elbow at his side with good posture. Good posture is the foundation for any instrument.” He was so schooled, now it all made sense.

While the excitement and appreciation of that eve  will never diminish, it is always accompanied with the memory of the utter shock of only 2 days later when we loose Randy Rhoads in the plane crash on March 19th, 1982. Can’t believe it has been 40 years…no words. RIP RR…

We are currently In-Stock for the latest Randy Rhoads KnuckleBonz Rock Iconz Collectible statue as well as 3D Vinyl for the Diary of a Madman Tour.