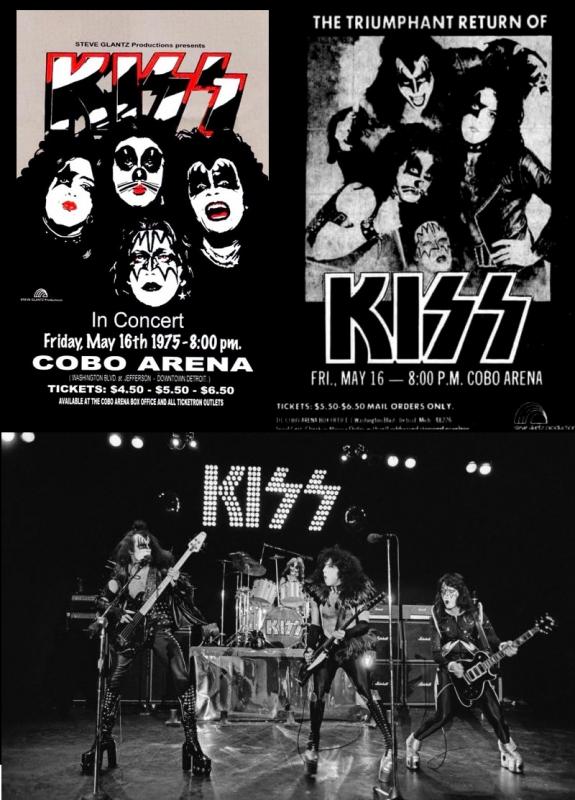 47 years ago on May 16th – KISS headlined Detroit’s Cobo Hall for the 1st time. A sellout crowd of 12,000 future KISStorians were treated to one of 72 dates on the Dressed To Kill tour. It was also the first of (5) shows that KISS recorded for what would become one of the greatest live albums ever, KISS ALIVE!

Rock photographer Fin Costello’s famous photo shoot also happened during this period that would be the source of the front cover and back covers of KISS Alive! Fin was a major contributor to Circus Magazine and other rock monthly mags if you recall.

Paul Stanley comments on the Cobo show and Detroit:

“This concert and the release of “Alive!” marked a pivotal giant step towards achieving domination in the 70’s. “Detroit Rock City” was written as a salute to the people who championed us as a headliner when others still saw us as an opening act. We can never forget them. We decided, that was the only place we would start the Reunion Tour.”

KnuckleBonz Created a statue set to capture this era of the band that has been SOLD OUT for some time. You can check out what you missed here.

If you are in the KISS Army, out latest statue set for Gene Simmon The Demon, Paul Stanley The Starchild, Ace Frehley The Spaceman and Peter Criss The Catman is from the Dynasty era and has just landed in our US warehouse to begin shipping. Order Here…No FoMO.