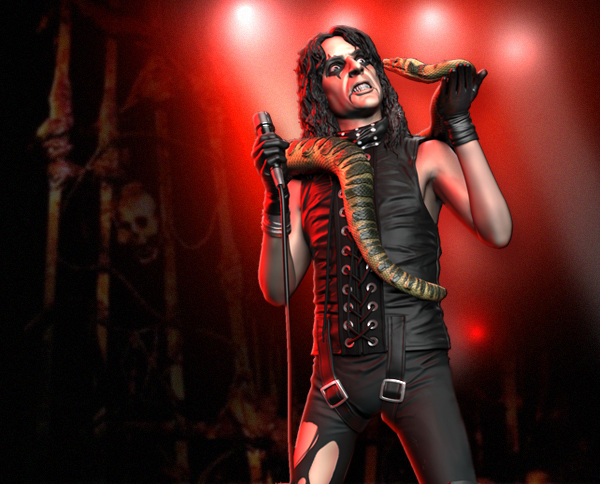 We Owe It All to Alice Cooper – KnuckleBonz Rock Iconz

While rock music was certainly mature and well entrenched in the lives of both young and old when Vincent Furnier a.k.a Alice Cooper and his band mates emerged in the late 60s and early 70s. The original Alice Cooper band released their debut album in 1969, and broke into the international music mainstream with the 1971 hit song “I’m Eighteen“. However, what Alice Cooper, Glen Buxton, Michael Bruce and Dennis Dunaway did on stage was about as far from mainstream and we could dare imagine. Rock shows at this time occasionally attracted the wrath of parents and the press for a spurious lyric, or a writhing of the hips. However, what The original Alice Cooper band and later Alice Copper solo live shows would perform defied imagination. Live snakes, a full scale guillotine, 20 foot monsters, straitjackets, nothing was out of bounds for Alice Cooper.  Just think of all the things that came next, inspired by Alice Cooper’s desire to simply entertain. There perhaps would be no KISS and Gene Simmons spitting blood, Motley Crue’s outlandish costumes, Gwar’s ridiculous antics, King Diamond, Ghost’s Papa Emeritus, Slipknot and Cardinal Copia…you name it. All these Rock Iconz®  may have stayed in the genie bottle…take a moment today to say THANK GOD FOR ALICE COOPER!

Check out our Alice Cooper Rock Iconz® and all the KnuckleBonz® Limited Edition Collectibles at www.knucklebonz.com