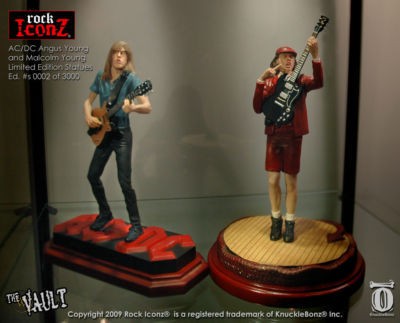 On this day we lost Malcolm Young, described as the driving force of AC/DC. Although younger brother Angus Young was always the face and the focus of the band in the music press, Malcolm was that “right boot,” kicking the band in the rear every night to deliver their brand of hard rock that has never waivers to this day.

Our original licensing deal back in 2007 saw release Angus and Malcom Young in sperate limited edition statues. Long since SOLD OUT, those AC/DC statues are some of the most sought after in the 19 years of KnuckleBonz.

You can see the ACDC current KnuckleBonz collectibles here

Rock in Peace Malcolm, we miss year every time we drop the need on AC/DC.