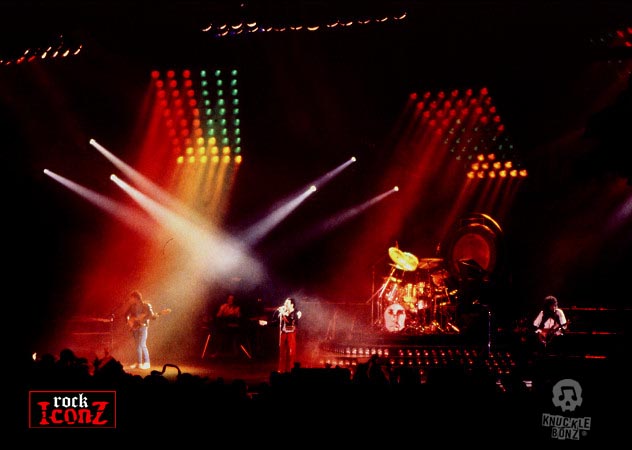 If you  are a QUEEN fan on any fervor, this post is probably not news, but we might have a few points that will have you take a new look at this amazing concert footage of Freddie Mercury, Brian May, Roger Taylor and John Deacon. It  was shot and the hallowed Montreal Forum in November of 1981. The band was not actually on tour at this time, so this show was a bit of a one off. The band had recently released the Flash Gordan soundtrack and they included this in the show for the 1st time. We at KnuckleBonz  actually got to see this live stage setup in 82′. The Flash theme live was spectacular. The production was laced with some drama of course as Freddie was none to pleased with the film’s director. He required the band to wear the same costumes on back-to-back nights and expected them to hit  “marks” during each performance. A common practice in film or TV, but not for the spontaneity of QUEEN live. However, the result was amazing for the time. The film since undergone a digital enhancement using NASA video processing algorithms and painstaking re-editing. We now have a 1080p masterpiece with unrivaled closeups of Freddie at the piano. “Somebody to Love” is a must see. Might make a great subject for us at some point. Hard to believe it’s been over a decade since our Brian May and Freddie Mercury Rock Iconz Limited Edition statues.