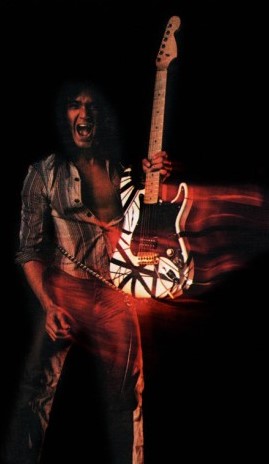 The year was 1978, a 22 year old Eddie Van Halen set out to create a guitar that would deliver the sounds he had in his head along with the playing action that he could not get on any production axe of that day. Also In Eddie’s head was a graphic design sense that would culminate in perhaps the most recognizable guitar in music history, the “Frankenstrat.”

Eddie first bought a factory-2nd Strat body and that he would combine it with a replacement strat neck he got from the Wayne Charvel guitar shop in San Dimas, CA. The headstock was a CBS-Style Fender Strat shape. Eddie wanted a fatter sound  of the humbucker pickup, but quickly found it would not be plug-in play so we started hacking away at the pick up position on the body until the Gibson PAF pickup would fit. It was not a good look, but the pick guard covered covered most of the destruction. All the tone controls were then removed with the single volume pot left to hold the white “Tone” knob. With a can of Schwinn spay paint in hand a black coat was applied and allowed to dry. Ed then added masking tape to create a random set of lines. A white paint layer was then added to breath life into the Frankenstrat. The look of the guitar was pure “controlled chaos” that hinted at the music that was to come.

We at KnuckleBonz were fortunate enough to see the Frankenstrat on it’s first USA national tour when Van Halen opened for Black Sabbath. I can still remember the feeling after the VH set finished. We knew things were different.  A special moment we will never forget.

1 thought on “Eddie Van Halen – Frankenstrat – The Paint Job Heard Around the World!”