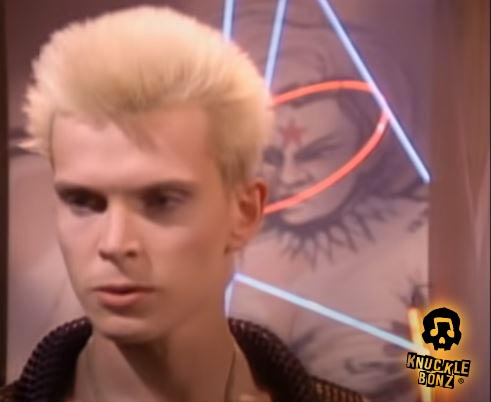 In 1981, the new platform of MTV and a few artists were poised to dominate the new music scene. Is there a better pioneer and beneficiary of this new music video platform and Billy Idol? Look no further than the video “Dancing with Myself” for validation.

*Dancing with Myself was actually a Generation X song, first released first in the UK in 1980. Billy was in Generation X in the late 70s post punk era.

*Billy Idol and bass player Tony James were inspired to write the song while tour in Japan 1979. They were struck by Japanese disco-goers  dancing to their own reflections in mirrors than lined the club walls.

*The video theme was a take on the “Omega Man” movie post apocalyptic  theme casting Billy Idol as the last man on earth against a crazed mutant horde.

*Dancing with Myself was Billy Idol’s first hit in both the UK and the USA.

*The single Dancing with Myself and MTV video launch Billy Idol’s solo career. Joining with guitar god Steve Stevens, Idol would go on to become one of the biggest performers of the post punk, new wave MTV era.

Check out the official video here.

Our original Rock Iconz® Limited Edition Statue with Billy Idol sold out in 2019. KnuckleBonz® collectors will be happy to learn that (2) new designs for the Rock Iconz Series with Billy Idol and Steve Stevens will be announced soon, Staytuned…

As always, check out the greatest music performers and KnuckleBonz Collectibles here.